The sounds of snipe. From the light “chip, chip, chip” of one snipe calling to another, to the “scaip, scaip” cry and beating of wings heard on the flush, what authors sometimes poetically suggest the snipe flushed is crying out “escape!  escape!”.  I love these sounds.

I spent the pre-season autumn carefully reading what must be considered a modern classic, Snipe and Woodcock – Sport and Conservation, by Colin McKelvie.  A practical discussion of the subject interleaved with literary references and with Mr. McKelvie’s fine prose style, it is a book spanning topics from habits and habitat, breeding and conservation, to appropriate guns and loads, hunting over dogs to walked up shooting – it is expansive.

This is a modern classic in the same way that de Visme Shaw’s “Snipe and Woodcock” is a classic for snipe shooting enthusiasts.  In a similar fashion to the classics, Colin McKelvie references not only the technical but also the literary, referencing Tennyson at the beginning of the chapter on natural history:  “The marsh, where humm’d the dropping snipe…”

I have found myself lingering over certain passages where discussion of the snipes’ sounds runs deep, for example discussing the “bleating” sound male snipe make during courtship, a sound I have yet to hear:

“The drumming sound of the snipe is a wonderfully evocative sound in the countryside in spring and early summer.  It is a pleasing, gentle noise that has remarkable carrying power, especially in moist, warm air, and it is often teasingly ventriloquial in quality, making it difficult to tell whether the drumming bird is above you, ahead or behind, or off to one side.”

“The bleating sound of the snipe in spring and summer has so dominated traditional ideas of this species that it was formerly referred to by the Latin name Capella, meaning “the little kid” or “the little she-goat”.  I have always liked this charming term, which is such an accurate reflection of the birds very prominent breeding sound, which is such an accurate reflection of the bird’s very prominent breeding sound, and it seems a great pity that it has been replaced by the formal Latin name Gallinago gallinago.  Nothing about the snipe strikes me as being the slightest gallinaceous or hen-like – the snipe is far too elegant and racy for such a parallel – while the comparison with a goat kid is apt and vividly descriptive.”

As I live in a wintering area for snipe, this passage caused me to peruse the Internet looking for recordings of this sound, something I heartily recommend (when not afield!)

Snipe and Woodcock – Sport and Conservation offers a complete discussion of common snipe, (but includes an interesting chapter on the jack snipe), ranging from details of shot loads and patterns, to different dog breeds and their efficacy, to methods for walking up and driven shooting, conservation matters, and so much more.  While focusing principally on snipe and woodcock in the British Isles, especially the Hebrides, and Ireland, McKelvie’s descriptive, informative and colorful writing combine to make this a must-read for the snipe shooting enthusiast.

Highly recommended, a search through abebooks.com will reveal numerous copies.  I obtained my from Paul at Coch-y-Bonddhu Books (www.anglebooks.com)  Happy hunting!

Readers of Hemingway who hunt are likely to have read “The Green Hills of Africa”.  In this book is a wonderful, fun and almost carefree description of a side duck hunting trip with his second wife, Pauline, and encountering snipe as incidental bag:

“A flock of dark ibises, looking, with their dipped bills, like great curlews, flew over from the marsh on the side of the stream where Karl was and circled high above us before they went back into the reeds.  All through the bog were snipe and black and white godwits and finally, not being able to get within range of the ducks, I began to shoot snipe to M’Cola’s great disgust.”

Apparently, his gunbearer was unimpressed.

But coming around to shooting in general, I love this line quoted from “Winner Take Nothing”:

“When you have shot one bird flying you have shot all birds flying. They are all different and they fly in different ways but the sensation is the same and the last one is as good as the first.” 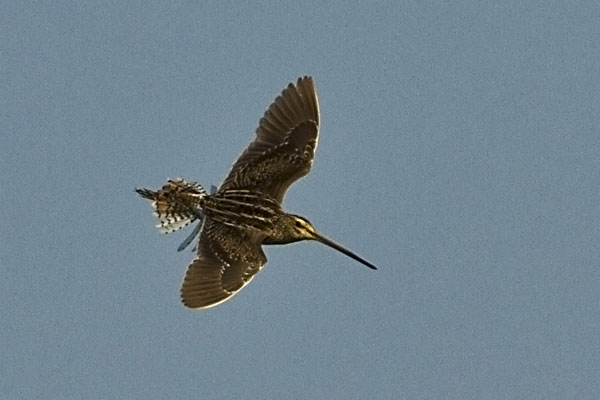 Wishing you all a happy and successful season.