In my literary wanderings, seeking poems and prose that include reflections on the snipe, I have found there is a veritable cornucopia of haiku on the diminutive game bird.  There must be something universal in the solitary nature of the snipe and its habits and habitation.

Here I reference the Japanese poet Issa, and his modern translator David G. Lanoue, for this haunting poem:

all people must
grow old…
the snipe rises 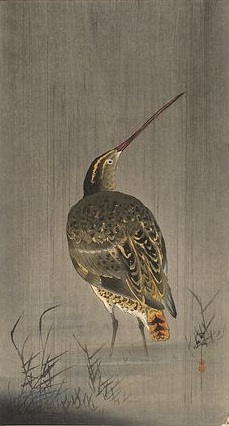 From David’s translation notes “This is an enigmatic haiku. Since the snipe is an autumn bird, perhaps Issa sees it as a sign of his own growing old.”